Founded in 1989, the Anchiskhati Church Choir has released several important chant recordings, and have been at the forefront of a traditional folk performance revival in the 1990s. Among Georgian choirs, they are considered one of the best. Their members have also published a number of books of chant notation.

Founded in 2009, the Aghsavali choir focuses on performing and popularizing complex traditional church chant. Their recordings projects have focused on chants that had not been recorded before, such as the repertory for the Canon of Andrew the First Called, Easter chant, and the Nativity heirmoi. Members of the choir including John A. Graham sing in the Kashweti St. George Church in Tbilisi.

The Basiani Ensemble began in the early 2000s with a focus on performing rare recordings of Georgian traditional folk and sacred music. Quickly distinguishing themselves, the choir became a “State Ensemble” and now tours the world regularly giving outstanding performances. Members also sing in the Sameba Cathedral in Tbilisi.

Founded in 2006, the Didgori Ensemble brings a lot of new talent to the neo-traditional revival of Georgian folklore, with songs from each style and region, as well as folk dances and instrumental numbers.

Founded in 2009 by a group of women studying at the Tbilisi Conservatory, the Ialoni Ensemble today recruits the best talent from among lady singers in Tbilisi. Their early albums focused on traditional chant, but in recent years they have recorded Georgian folk music, Georgian urban songs, and international folk music.

The Rustavi Ensemble has been a leader in popularizing Georgian folk music around the globe for many decades now, and their recordings have set the standard for all other choirs. They remain a “State Ensemble” and regularly perform abroad.

The Zedashe Ensemble, from Sighnaghi, Eastern Georgia, is a co-ed folk ensemble founded in 1999 and directed by Ketevan Mindorashvili.

The Georgian Harmony Association is based out of London, England, and coordinates workshops, tours, and choirs in the UK.

Village Harmony has become a well respected hub for world music performers. Based in Vermont, they coordinate US based tours, teach folk music camps, and take music tourists abroad. Their collaborative work in Georgia has done much to benefit awareness of Georgian music and culture… see online music store for latest Georgian folk and sacred music recordings.

The Alazani.ge website contains a vast amount of traditional folk and sacred music for free download, and is the aggregator of all Georgian music sites. We recommend searching under choirs (click the British flag in the upper right corner of the homepage for English) to find the best music. For Georgian sacred music, start with Anchiskhati, Basiani, Ialoni, Aghsavali, and the Samtavro convent nuns.

This website has some information and audio links to Georgian songs and chants.

The International Research Center for Traditional Polyphony website is the best source for specific information on the regional schools of Georgian sacred and secular music, and also includes an extensive bibliography on relevant subjects.

This is a very good site with an abundance of useful information.

Cappella Romana, directed by Alexander Lingas, is a professional choir based in Portland, Oregon, devoted to singing the liturgical music of the Eastern Orthodox Churches.

International Society for Orthodox Church Music is a society dedicated to the study of church music. Their conferences and publications are influential.

Ivan Moody, composer, has an extensive website with links to many Orthodox liturgy and music websites. 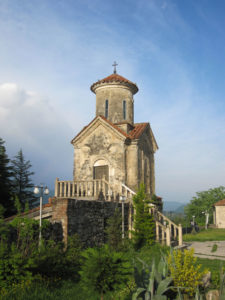 Pan-Orthodox Society Society for the Advancement of Liturgical Music.