The history of Georgian chant comprises music sung for the Georgian Orthodox liturgical services. It developed over several centuries, and was maintained as an oral tradition until the end of 19th century, when only a handful of older singers could remember the more sophisticated, rare variants and the all-important skill of improvised harmonization in three voices. Thankfully, a handful of people recognized the imminent loss of the chant tradition, and worked to save at least some portion of it (the following text has been edited from a text found on the Tbilisi State Conservatory website: www.polyphony.ge/

More than eight thousand hymns transcribed in the 1880s and 1920s by famous public and church figures such as Pilimon Koridze, Vasili and Polievktos Karbelashvili, Razhden Khundadze, and Ekvtime Kereselidze, represent the treasure of Georgian church hymns. The publishing press of Maksime Sharadze printed the first chant books starting in 1895. 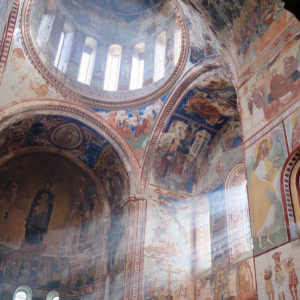 After the annexation of Georgia by Russia in the 19th century and due to the persecution of Georgian chanting, schools of chant moved from monasteries into families. As a result, the styles are sometimes named after their most famous interlocutors: Didi Geronti, Archimandrite Soprom, Archimandrite Tarasi, the Karbelashvili brothers, Chalaganidze, Kandelaki, Simon Kuti, Dumbadze, etc.

“Gelati monastery was considered to have fostered church chanting. The chief school was located here and the chanting spread not only in Western Georgia, but all over the country.”

Gelati Monastery served as a centre of chanting from the medieval “Golden Age” in the 12th century. In Gelati, the root of the musical language developed upon which various other branches would be founded. Thousands of Gelati monastery style chants were transcribed by Pilimon Koridze in the decades surrounding the turn of the century. The performers of those chants in most cases represented different chanting traditions and worked at churches and monasteries in different regions. But, the existence of the common musical basis and canon made it easier for people with different chanting traditions to chant together. Pilimon Koridze’s transcriptions serve as examples of this premise.

It is known that “The Committee for the Revival of Georgian Chanting” led by Bishop Gabriel Kikodze first chose the following three chant performers: Dimitri Chalaganidze, Ivliane Tsereteli and Razhden Khundadze. The trio of chanters was supervised by a representative of the Shemokmedi school, the universally acclaimed chanter Anton Dumbadze, the “grandfather of Gurian chanting, he who revived and promoted Gurian chant all over Guria-Samegrelo.”

Dimitri Chalaganidze was a son of Rostom Chalaganidze – once a famous chanter himself in Martvili. Rostom’s chanting teacher was Besarion (Dadiani) the Metropolitan Bishop of Chqondidi and consequently his son mastered the same chanting mode.

One of Razhden Khundadze’s letters tells about Ivliane Tsereteli. “In the Cathedral of Khoni, in one of the cells there lived an expert chanter Simona Kuti (Pirtskhalava). . . The number of his disciples is quite large, among them Ivliane Tsereteli – a priest and a famous chanter.”

Regarding his own chanting education Razhden Khundadze comments that he had learned chanting in Guria. The trio of Chalaganidze, Tsereteli, and Khundadze, as we can see, combines three chanting traditions. Because the notations of various chanting traditions from all over Western Georgia were preserved at Gelati monastery, this style has been given the name of Gelati school of chant.

The tradition of the Shemokmedi school of chant is also called Dumbabdze’s Mode. The Dumbadzes had always been clergymen and most of them had worked in Shemokmedi Monastery. One of the family members, Anton Dumbadze (1824-1907), is buried in the Monastery’s cemetery.

Among the famous chanters listed in Polievktos Karbelashvili’s book “Georgian Secular and Sacred Modes” there are several singers from Shemokmedi: Iakob Dumbadze (1679-1721), priest Giorgi Dumbadze (1875), and Mate Gogitidze (1541-1560) the head priest of Shemokmedi Monastery who devoted his life to saving and preserving Georgian chant under the dire historical circumstances of the 16 th century. Ioane Gogitidze, Mate’s nephew (1560-1590), is also mentioned here.

Several chants of the Shemokmedi school have reached us in the form of sound recordings. More than one hundred hymns were performed and recorded by Artem Erkomaishvili, Melkisedek Nakashidze’s student. Nakashidze, a prominent chanter, in his turn, had been Anton Dumbadze’ disciple.

The tradition of the Shemokmedi school is also reflected in the audio-recording of 11 chants recorded by Dimitri Patarava, Varlam Simonishvili and Artem Erkomaishvili in 1949. These recordings are preserved at the sound-archive of the Georgian Folk Music Department at Tbilisi State Conservatoire.

The Kartli-Kakhetian chant (tradition of Eastern Georgia) is represented by the so-called Karbelaant Kilo, recorded by the Karbelashvili brothers. Polievktos Karbelashvili’s book “The Georgian Secular and Sacred Modes” (Karbelashvili P., 1898) provides very interesting information about the origins of this mode. Polievktos Karbelashvili’s grandfather Petre Karbela (Khmaladze), born in 1754, mastered the art of chanting as a young man at the court of King Erekle II. Later he became a teacher of chanting at Samtavisi church. Petre Karbela’s son, Grigol, who was among his students, later passed this tradition of chanting over to his sons – Polievktos and Vasili.

The history of Georgian chant in Kartli-Kakheti was unfortunately doomed to be forgotten. At a special meeting called in 1764 by King Erekle II and Catholicos Anton, it was resolved to church men and heads of monasteries to “set up choirs of chanters at all diocese and monasteries.” For this reason a School under the Catholicos’ supervision was founded at the Svetitskhoveli Cathedral where young people studied Georgian chanting together with various other subjects. Like old times, children from noble families studied here. Soon two choirs performed their chanting. The alumni of this school later passed their knowledge over to their disciples all over Kartli and Kakheti.