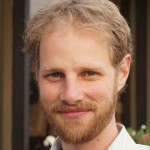 I’ve been excited recently to memorize a gamshvenebuli kilo version of the popular chant Jvarsa Shensa [To Your Cross We Bow Lord] that I discovered in one of Sharadze’s original publications from the 1890s. The music type was set by Ekvtime Kereselidze.

The structure of the chant is almost exactly the same as the sada kilo Tone 6 chant that most people know and sing in Georgia today, but all three voices are ornamented, with voice crossings in every cadence. I was able to photocopy this version from Malkhaz Erkvanidze’s personal copy, so I have some of his editing marks, most importantly a change from C major to A major.

Notice the “3#” marking above the score;

Sometimes it’s difficult to stomach what seems like such a drastic change, but according to Malkhaz’ logic, certain chords, such as B, F, A do not occur on strong beats in Georgian music, and must be transcribed another way, such as B, F#, A. Another strong reason to give this chant three sharps is that all of the cadences occur on the open fifth of F-C, usually through ascending parallel fifths in the bass and first voices. To resolve up to a cadence by means of a half step in both the bass and first voice would admittedly be quite bizarre in Georgian music: D-A to E-B resolving to F-C. This sounds much more “Georgian” when it becomes D-A to E-B resolving to F#-C#. Is anyone with me?

However, there are several places where the new key of A major (or rather E mixolydian), does not create correct sounding chords, and this might be one of the reasons Malkhaz has not published this chant in any of the recent chant publications that include gamshvenebuli kilo (colorful mode) chants such as Volumes II and IV. For example, in the cadential pattern mentioned above, the middle voice has a typical descending cadential line A B G# G# to F#, meeting the rising bass part.

(Cadence in question is in the first bar below…) 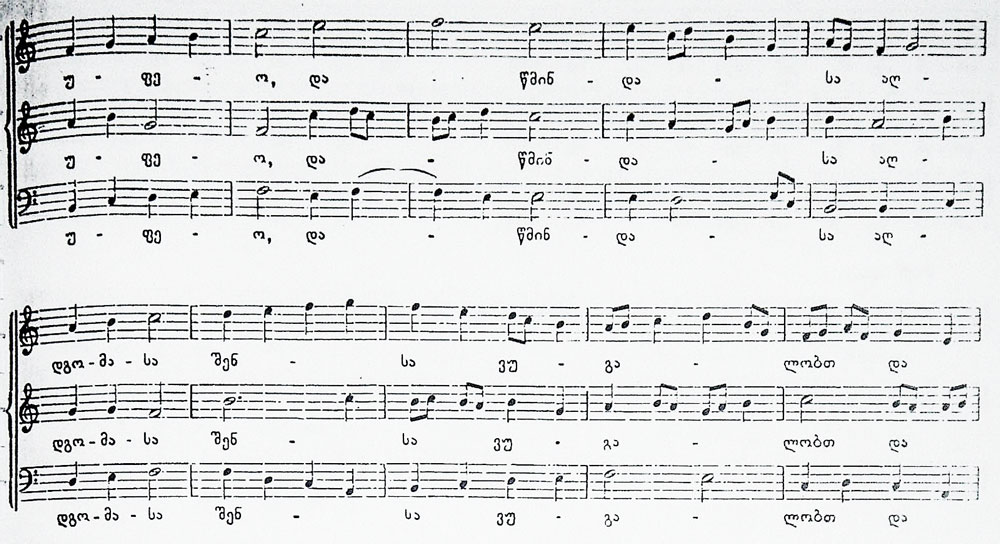 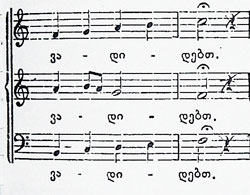 With three sharps, the pen-penultimate chord of D-G#-A in the cadential sequence D-G#-A to E-G#-B resolving to F#-C# is highly discordant and uncharacteristic of Georgian chant. One does not usually find a half step between the upper two parts such as a G#-A clash (please correct me), which would be better served if the upper two parts enjoyed a larger interval (even a 3/4 tone) which would give the proper sonority of a suspension.

As my Princeton men’s choir “Gaumarjos” was studying this variant of Jvarsa Shensa variant, we tryied to resolve this tuning discrepancy by tuning the outer voices up in that moment, creating a chord closer to D#-G#-A# (3rd beat of the first measure above).

While strange to our ears, the resulting chord actually sounds a lot like the Artem Erkomaishvili recordings from 1966, where he seems to avoid singing half steps by ascending/descending with 3/4 tone intervals. When Artem sings up five scale degrees, there is never a half-step, prompting one to start looking for neutral third degrees, etc. Our attempt is clearly still in the experimental phase though.

There were a number of tuning issues that had to be worked out during the transcription movement in the 1880s, and re-sounding those transcriptions into three part harmony now, more than a century later, involves more than a bit of guesswork given that we have very few recordings to tell us exactly what what was going on in terms of tuning and modulation.

1. INTRODUCTION The present paper discusses selected results from my dissertation work on “The History... 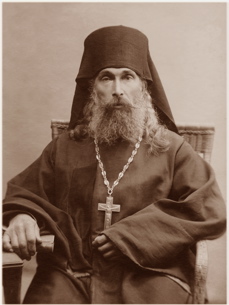 Ekvtime Kereselidze (1865-1944) is a vital figure in the history of Georgian religious chant. His... 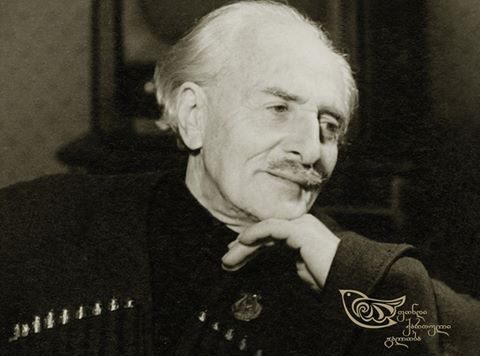 By way of some background, my involvement with the study of Georgian music started...

Part III: East Syriac and Georgian Connections   Part I: Chanting Around the Throne of... 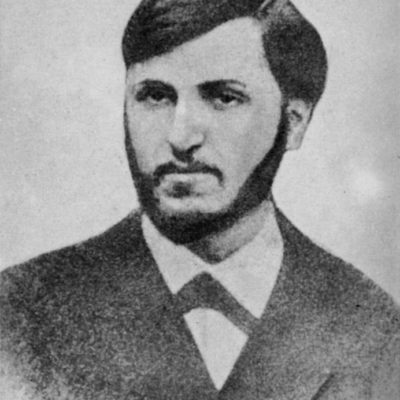