Ekvtime Kereselidze (1865-1944) is a vital figure in the history of Georgian religious chant. His courageous actions in the frightening years between the assassination of Ilia Chavchavadze in 1907 and the Bolshevik terror in 1937 ensured the survival of a majority of the repertory of this medeival musical tradition. He was canonized a saint of the Georgian Orthodox Church in 2003.

Born Estate Kereselidze (1865-1944), as a young man he left his home in the Rachan highlands of the northwest Caucasus to become a cook’s helper in Kutaisi, later moving to Tbilisi in Eastern Georgia.

In 1885, he met Maksime Sharadze, who inspired Kereselidze to help found a brotherhood of friends dedicated to the publication of moralistic teachings and the establishment of a small library of Georgian texts. With members of this brotherhood, called the “Cabinet,” they worked as printers and type-setters at Ilia Chavchavadze’s influential Iveria newspaper, where they picked up many nationalistic ideas.

At the same time, they began studying church chant with Melkesidek Nakashidze, and later met the famous opera singer and chant transcriber Pilimon Koridze in 1891. This meeting generated a lasting relationship between Koridze and the “Cabinet” members, who worked tirelessly to support his transcription efforts by providing a working salary through their fund-raising drives, writing regular articles praising Koridze’s work with rural chant-masters, and finally publishing the finished chant transcriptions. The first musical type-set in Georgia was acquired by Maksime Sharadze in 1891, and the first book of liturgical chant was published in 1894.

The “Cabinet” and the printing press fell apart after Sharadze died in 1908. Ilia Chavchavadze had been murdered in 1907, and Pilimon Koridze passed away in 1911. Faced with a huge amount of hand-written transcriptions (more than 5000), and crates full of half-published chant books, Kereselidze realized that the fate of the Georgian chant tradition, preserved in oral memory for centuries, now rested solely upon his stewardship.

Facing a crisis of conscience, Kereselidze dedicated himself to the organization and recopying of the chant transcriptions, a task he would dedicate the rest of his life to. In 1912, he became a novice at the historic Gelati Monastery in western Georgia, and began studying the intricacies of the Orthodox liturgical rite. By night, he was observed hand-copying Koridze’s rough transcriptions into finely scripted manuscripts, carefully bound and organized according to the cycles of the liturgical calendar.

Many of the chants had been incompletely transcribed in order to save time, so Kereselidze, now tonsured with the name Ekvtime (after Saint Ekvtime of Mt. Athos, the Translator, died 1028) (pronounced ehk-ftee-meh), contracted Razhden Khundadze to harmonize the melodies into three voices. Khundadze was a priest in Kutaisi at the time, and one of the last living chanters with a masters-level knowledge of chant harmonization and improvisation.

In 1923, Ekvtime Kereselidze had to flee for life, as members of the Young Communist party threatened to expel all of the monastics from the Gelati Monastery. Indeed, in 1924, the bishop of Kutaisi and three priests were killed by Young Communists. Kereselidze found refuge in Mtskheta for several years, where he was the spiritual father for many of the nuns and monks in the area, who took care of him in his elderly years. He kept his work on the chant transcriptions secret, for fear that they would be confiscated by an increasingly anti-religious administration.

In 1936, two archivists heard of the old monk with music transcriptions, and expecting to find a dozen or two dozen hymns, they sought out the elderly Kereselidze and gained his trust. He asked them to return for a list of his holdings the next day, and upon doing so, they were astounded to find a stack of leather-bound manuscripts accompanied by a perfectly scripted, detailed list of the 5532 chants contained therein, all arranged according to the three major liturgies, the 12 Immovable Feast Days, the troparia of the Saints, and chants for funerals and weddings.

They realized in that moment that Koridze’s almost forgotten transcriptions, long assumed to have been lost, had not only been perfectly safe-guarded but improved upon by a single old monk. They took the chant books and placed them in the State Archives for safe-keeping. The next year, both archivists were killed in the purges of 1937, their names forgotten among thousands on the lists of the missing, except by Kereselidze, who recorded their assistance in a small book he completed in 1942 titled, “On the History of the Transcription Movement of Georgian Liturgical Chant.”

Ekvtime’s final years were spent at the Zedazani Monastery outside Mtskheta, where he was the sole inhabitant for the years leading up to his death in 1944. He was canonized Saint Ekvtime the Confessor in 2003 by a Synod of Georgian bishops.

From a remarkable eye-witness account, we know that Ekvtime conducted his own liturgies, accompanying himself by singing the canonical chants that he had so carefully labored over. The eye-witness, a female translator for a high-ranking undercover British intelligence officer in the early years of World War II, told the story to a Russian monk years later, recalling that the officer had been moved by the beauty of the singing, she had discovered him weeping in the back of the sanctuary.

Today, every chanter in Georgia knows the name of Saint Ekvtime the Confessor, canonized by the Georgian Orthodox Church in 2003, who gave his life to preserve and safeguard the treasure of Georgian liturgical chant. 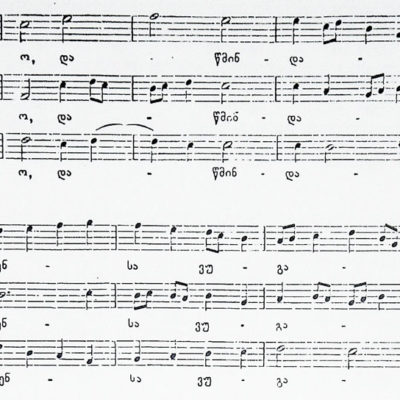 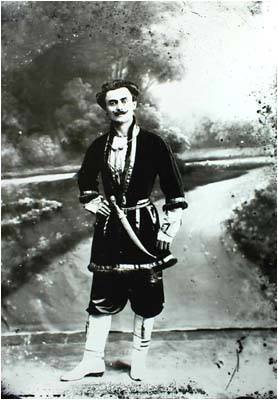 The Lord's Prayer is sung mostly as a recitative in Georgian Orthodox services. One of...

Easter is a season for singing, and no chant is more prophetic and beloved than...